Our Response to COVID-19
Links & Info For This Location: +
Our Services
For Patients & Visitors 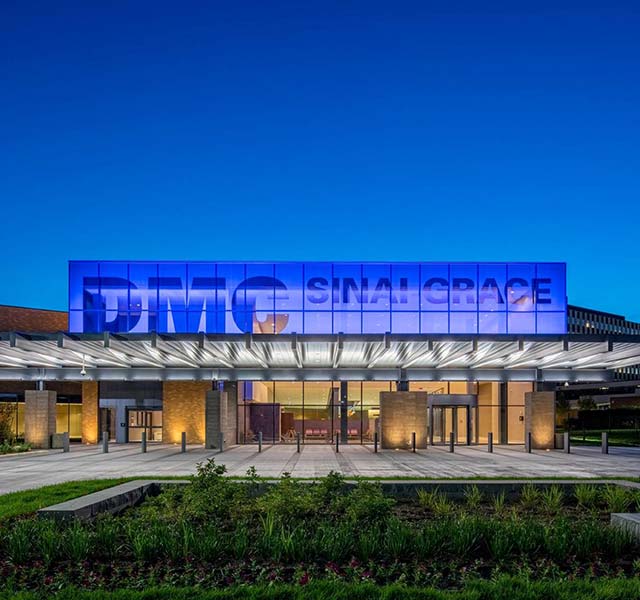 Links & Info For This Location:
Our Services
For Patients & Visitors

A Bright and Promising Future

Between 2012 and 2016, DMC invested $77 million in Sinai-Grace over three phases of construction, making it the largest construction project in Northwest Detroit in over 10 years. Phase I of the project was completed in 2014 and resulted in a new 59,000 square foot Emergency Department and Trauma Center that tripled the size of the former ER and features all-private patient rooms. Phase II was completed in February 2015 and produced two new technologically-advanced, family-centered Intensive Care Units. Phase III resulted in a modern and bright new entrance, expansive 18,000 square foot lobby, new roomy registration suite, and expanded radiology area which all opened in June 2015. Phase III was completed in January 2016 with the opening of the new and expanded laboratory.

Since this major construction project completed in early 2016, Sinai-Grace has continued to invest in the hospital's facility with renovated patient care units, cath lab and advanced surgical technology.

A Look at Our Noble Past

Since 1888, two hospitals with roots in the community boldly consolidated services under one roof in April 1999. The former Sinai and Grace hospitals joined to create the leading community academic hospital in northwest Detroit and relocated to the former Mount Carmel Hospital building.

Grace Hospital, founded in 1888, was named after one of the founder's daughters, Grace McMillan Jarvis. Sinai Hospital's roots go back to a clinic opened by Harry Saltzstein, M.D., in 1922. Sinai Hospital first opened its hospital doors in January 1953 to give Jewish healthcare professionals a place to practice and as a central institution for the Jewish community.

Sculpture of LifeTrees centrally-located in the new expansive lobby of Sinai-Grace are the commissioned artworks of The Nordin brothers from The Detroit Design Center. Fitting with DMC's quest to be an important part of Detroit and support Detroit entrepreneurs, the "LifeTrees" sculptures symbolically tell the story of Sinai-Grace's rich and impactful past, while strongly signaling a bright and influential future in the health of Northwestern Detroiters and the surrounding communities it serves.

The Detroit Medical Center is a leader in emergency medicine providing hope and healing for generations. DMC connects pa...

DMC has dedicated powerful resources to creating Cardiac Care centers which are leaders in the region for research and c...

DMC's Gastroenterologists are physicians with training in management of diseases of the organs of the digestive tract.

From interest in long-term birth control to more information about our minimally invasive gynecological procedures, DMC

Hospice care is a philosophy of caring that assists those nearing the end of life and in need of refuge.

Nephrology concerns itself with the diagnosis of kidney disease and its treatment, including kidney dialysis.

DMC cancer center experts know that you are unique and will develop a treatment plan designed to best target your indivi...

Bone and joint problems don’t discriminate – they can happen to anyone, at any age. Ortho specialist, call 888-DMC-2500

For over 50 years, Rehabilitation Institute of Michigan (RIM), has been helping people rebuild their lives after a serio...

Detroit Medical Center is your best resource for primary care physicians, connected to the full spectrum of specialists

At the DMC Lung Institute, patients don’t have one doctor – they have a team, providing comprehensive pulmonary care.

The DMC is dedicated to stroke care before, during and after it happens. For info/appointment, call: 1-888-DMC-2500.

Urology is the field of medicine that focuses on the urinary tracts of males and females and on the reprodu. Read more

Detroit Medical Center Wound Care is dedicated to and focused on the treatment of patients with chronic wounds.