SOUTHFIELD, Mich. (WXYZ) — If you found yourself a tad grumpy Sunday after losing an hour of sleep, you'd be in good company.

Studies show most Americans would like to put an end to bidding farewell to that hour of sleep in March and waiting months for the joy of welcoming that hour back in November.

Even the animals at Maybury Farm in Northville know something is off when we "spring forward" or "fall back."

"We have our routines, what time we eat in the morning, what time we eat at night. They're the same way," said Maybury Farm Executive Director Diana Wallace as she stood next to three of the farm's newest cows, Caramel, Mocha and Cookie.

But while the U.S. Senate voted this week to eliminate that biannual clock change in the Sunshine Protection Act, it would also come with something sleep experts don't want to see happen—making daylight saving time permanent in 2023.

Shelgikar and other physicians across the country say making the daylight saving time permanent comes with increased health risks.

"What will really be noticeable is in the winters when we start to have very dark mornings because we won't be falling back," she said. "It can have implications for being able to get up on time and even for traveling safely to school, for example. So there are a many there are a number of consequences that could could result from being on a permanently shifted forward time, which is that daylight savings time."

Supporters of Americans living in daylight saving time year-round say it would give children more time to play outside in the afternoon and it would be good for the economy because the increased light in the afternoon could mean more people shopping after work, increasing spending on gas and food.

But many physicians are urging lawmakers to make standard time a permanent thing, which Dr. Shelgikar said would allow our body's internal clock to be aligned with the timing of the sun, giving us more light in the morning and darkness in the evening.

"It's well known that the changes every March result in increases in cardiovascular disease, heart attack, stroke, driving accidents. And there are some subtle changes even when we go backwards again in the fall," he said.

Dr. Rowley said he firmly believes that we should be on permanent standard time.

"There's good evidence that we need sunshine in the morning to be awake during the day," he said, adding that if lawmakers adopt a uniform daylight saving time, Michiganders won't have sunlight until 9 a.m. in the winter.

The following is a part of a statement from the American Academy of Sleep Medicine: 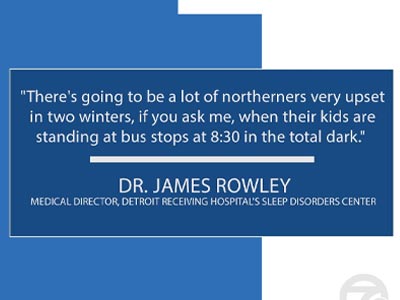 Back at Maybury Farm, Wallace says the animals will be eager to greet guests who are looking for relaxing ways to adjust to the time change this weekend and the next.

She said in many ways, their animals are a lot like people, looking for consistency.

"It's just like all of us," Wallace said. "And we have all of our other animals that just can't wait to have somebody come out and talk to them."

The farm's regular hours, Tuesday through Sunday, from 10 AM to 5 PM, begin April 12.