Dr. Sidhartha Tan has accepted an appointment as the division director of Neonatal and 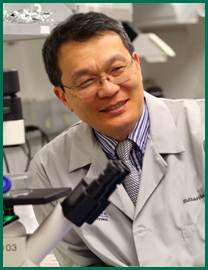 Perinatal Medicine at the Detroit Medical Center’s (DMC) Children’s Hospital of Michigan and Hutzel Women’s Hospital, professor of Pediatrics at the Wayne State University School of Medicine and the Helppie Professorship in Pediatric Urban Health.

A nationally recognized expert on cerebral palsy whose breakthrough research is aimed at eventually curing a disease that affects more than 500,000 United States children and their families said he “can’t wait to begin his new role as the division chief of Neonatal and Perinatal Medicine at the Detroit Medical Center.”

Sidhartha Tan, M.D., has more than 30 years experience as a hospital neonatologist and researcher in both cerebral palsy and ischemic hypoxic injury. Since 2009, he has served as a neonatologist at several hospitals in Chicago while also teaching pediatrics as a clinical professor in the Department of Pediatrics at the University of Chicago’s Pritzker School of Medicine.

Dr. Tan’s new appointment took effect on Friday, July 1. He will replace the current division director of Neonatal and Perinatal Medicine at the Children’s Hospital of Michigan and Hutzel Women’s Hospital, Seetha Shankaran, M.D., a veteran researcher in hypoxia-related brain injury in newborns. Dr. Shankaran, professor of Pediatrics for the Wayne State University School of Medicine, will be stepping down as the division chief to focus on research that will continue to set the standard of care for neonates around the globe. For more than 40 years, Dr. Shankaran has been a major investigator in the Neonatal Research Network of the Eunice Kennedy Shriver National Institute of Child Health and Human Development. In her joint roles as Distinguished Professor of Pediatrics at the Wayne State University School of Medicine and division director of Neonatal Perinatal Medicine at the DMC, she has taught hundreds of medical students how to care for both premature and full-term babies.

Her groundbreaking longitudinal research over many years on the use of “therapeutic whole-body cooling” for infants who were oxygen-starved at birth has been a major contribution to lowering death and disability rates among newborns. She will continue with the university and the Children’s Hospital of Michigan after July 1 to continue teaching and conducting research.

Describing Dr. Shankaran’s long record of outstanding service, Dr. Tan said, “I think she’s done a tremendous job as chief of the division. I look forward to building on her legacy, while maintaining the Children’s Hospital of Michigan’s outstanding reputation for good patient outcomes, effective clinical practices and leading-edge research.”

Dr. Tan has often been described as a “leading cerebral palsy researcher.” He also serves as associate editor of the authoritative clinical publication, Developmental Neuroscience. His medical research has been funded by the NIH without interruption since 1992. Dr. Tan is internationally recognized as the founder of the Cerebral Palsy-Cure and Prevention Research network and the Study Group for Therapies for Cerebral Palsy, which now connects a dozen developing brain researchers and clinicians across the globe.

Dr. Tan was a former member of the NIH Study Section for Developmental Brain Disorders for six years and presently a member of Neurological Sciences and Disorders - a standing committee of the National Institute of Neurological Disorders and Stroke. Dr. Tan has spent more than 20 years investigating the causes of and treatments for fetal brain injury from ischemic hypoxia and inflammation. His Chicago laboratory in recent years has become an international center for research on developmental brain injuries among newborn infants.

Dr. Tan has proven success in attracting federal funding support for his programs and is a dedicated clinician who’s passionately committed to improving patient outcomes,” said Children’s Hospital of Michigan Pediatrician-in-Chief and chair of Wayne State University Department of Pediatrics Steven E. Lipshultz, M.D. “We are very fortunate to have Dr. Tan. His credentials as a researcher and leader are impressive – and the Children’s Hospital of Michigan and Wayne State University School of Medicine are dedicated to encouraging and supporting clinical research. But I also want to salute the remarkable contributions in research and clinical care that have been made by Dr. Shankaran during her tenure of devoted service to the mission of the Children’s Hospital of Michigan.”

For more information on the Detroit Medical Center, visit www.dmc.org or call 1-888-DMC-2500.