Sunday was bittersweet for Jim Taylor. 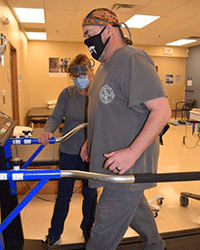 The same day trucks left a Kalamazoo-area manufacturing plant carrying the COVID-19 vaccine for widespread use at local hospitals, including the one he was in while recovering from the virus, he was headed to Florida to spend Christmas with his family.

"Everyone who prayed for me is down there," Taylor said, of the family members who kept up a vigil for him during his long recovery from the coronavirus. "It's been a rough year so we are definitely looking forward to kicking back in the sun."

Before he contracted the virus he was busy working as a Lyft driver and had just finished celebrating his wedding anniversary.

"We went to Greektown for dinner and then to the casino," Taylor said of the celebratory evening spent with his wife, Deborah.

A week before that he had been feeling ill -- having trouble breathing and a cough that would not go away -- but he visited an urgent care and was sent home with a prescription for Zithromax (azithromycin) also known as a Z-Pak. The antibiotic is used to treat bacterial infections such as bronchitis, pneumonia, and infections of the ears, lungs and other organs.

However, after their anniversary he got worse so Deborah rushed to him to the hospital. 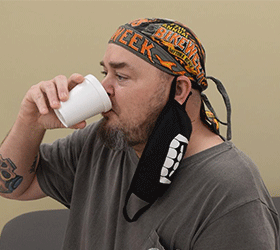 "My temperature was 103 degrees," Taylor said. "She dropped me off at a big blue tent. Then, they put me in a bed and rolled me into a room. I remember getting mad because I was super thirsty and no one was getting me water."

Shortly after that he ended up on a ventilator and in a coma.

Eleven days later he woke up to a nurse holding a phone and asking him to wave to his wife.

"All I could do was move my fingers," said Taylor, who later learned that he had suffered three strokes while in a coma and has been fighting to regain a sense of normalcy ever since.

There are many other men and women going through the DMC Rehabilitation Institute of Michigan's (RIM) COVID-19 Rehab Recovery Program at the RIM Sterling Heights Outpatient Center who have had COVID.

"I've had four patients that have had it," said Cheryl Trudeau, a physical therapist at the RIM center who had just finished monitoring Taylor's progress during a brisk walk on the treadmill. "One of our goals is to get him walking more and longer."

Trouble walking, balance and low stamina are among the things that many COVID patients experience during their recovery. Physical therapy helps but under normal circumstances Trudeau would advise her patients to continue to work on their endurance levels at home.

"We used to send people to the mall or to their local gym," Trudeau said.

But because of the lockdown that has not been an option for them.

"We've had to tweak our physical therapy programs because we are unable to do what we did before," she said.

Taylor has been working on his recovery plan since July but his was a severe case, compounded by his diabetes and problems associated with strokes.

In a report for Yale Medicine, Andre Sofair, MD, MHS, a Yale Medicine internal medicine physician who has been taking care of patients with mild to moderate COVID-19 at Yale New Haven Hospital said the average length of stay, based on her experience has been five or six days for patients in the hospital who are not in the ICU.

"There are some who recover very quickly and get out sooner and others who end up in the hospital for two weeks-plus," Sofair said.

After that it could be several more weeks or months in physical therapy.

Matthew Ellman, MD, director of Yale Internal Medicine Associates, said his practice is taking care of many patients who have not required hospitalization, as well as those who have been hospitalized and returned home.

"Eighty to 85% of our patients who are infected do not need to be hospitalized, but they do require monitoring and medical care, most of which is now taking place with telehealth," Dr. Ellman said, adding it's typical for these patients to have a telehealth appointment, either on phone or video, at least every other day for 10 to 14 days from the onset of symptoms.

But everyone is different and therein lies part of the problem.

"It's hard to set goals when we are still learning how COVID is impacting patients," Trudeau said. "We're doing more out-come measuring and then changing the therapy from day to day because we don't know the normal outcome."

As for Taylor, his goal is to enjoy Christmas with his family and do as his doctor says.

"I'm going to have access to a pool so I will keep exercising and follow the safety precautions recommended by the CDC," he said, including wearing a mask in public. "I'm going to get some Tampa Bay Buccaneers masks and maybe some with palm trees."