He almost became a statistic.

Detroit resident E’yandra Otis almost took his life in 2016 after facing emotional turmoil and the loss of numerous family members and friends in recent years.

“I spent so much time in the funeral home I felt that I worked there,” Otis told the Michigan Chronicle of cousins and friends of his who tragically died. “It was a lot — a long year.” 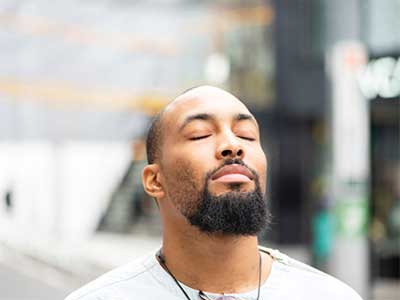 Around the world, more than 700,000 people die by suicide every year, which is one person every 40 seconds, according to the World Health Organization, which reports that for each adult who passed away from suicide there might have been over 20 others attempting suicide.

There is help, however.

Every year, many mental health organizations and individuals band together across the United States and around the world and bring attention to suicide prevention during National Suicide Prevention Month in September.

For Otis, having conversations and seeking mental help helped him out of his downward spiral of emotions also stemming from family troubles, financial hardships and more.

Otis, who almost ended things with some alcohol and pills, said he finally came to that life-changing day five years ago and is glad he did.

“I’m not the most spiritual person… I grew up in church and everything,” he said, adding that he had a God-like encounter in his car that he heard clear as day: ‘You’re not finished, get up.’ “I thought that somebody broke into my vehicle — thought somebody was in there. There was nobody but me and a headache.”

He added that “everything changed from that moment on” and he started meeting more people, getting involved in the City of Detroit, and encouraging others who were in his shoes.

“The last few years have been a big eye-opening blessing for me,” he said, adding that as a mental health advocate he encourages others to speak to professionals and trusted family and friends who could lend a listening ear.

“I used to be a person that holds a lot of things in,” he said. “Now if I’m getting to a point where I feel like I need to talk to or call somebody I don’t have a problem asking for help.”

“All things that we do surround it and it affects everyone around us in some form or fashion. If your mental health is not taken care of, we are limited in our daily functioning when it comes to work, school, taking care of our families and most importantly ourselves,” he said. “Continued functioning in these areas inspire me to want Black people to do better at caring for themselves –– and in order to do these things, ensuring their mental health is taken care of is paramount.”

He added that with National Suicide Prevention Month in September it is important for Black people, among others, to encourage and support their loved ones.

“If we notice the signs of depression, anxiety and other stressors in advance, we can prevent an increase in suicide rates. We can have more survivors and ensure we continue to come together as a community to alleviate these high statistics,” he said.

Dr. L.A. Barlow, a clinical psychologist with the Detroit Medical Center, told the Michigan Chronicle that with the pandemic and its variants still ongoing (and social isolation still a thing), continuing to work on your mental health is not something to look down upon, especially in the Black community.

“Culturally a lot of times in our community we were raised to say, ‘Family business stays in the household,’” she said, adding that these things need to be talked about. “Mental healthcare and mental well-being [don’t] discriminate no matter race. Why should we not get the help?”

If you are in crisis, call the toll-free National Suicide Prevention Lifeline at 1-800-273-TALK (8255), available 24 hours a day, 7 days a week. The service is available to anyone. All calls are confidential. http://www.suicidepreventionlifeline.org.