Mia Rybski jumped up and down in her multicolored pink coat and teal cowboy boots, the 7-year-old gripping a blue sign with green and orange letters: "Welcome Home We Love You." 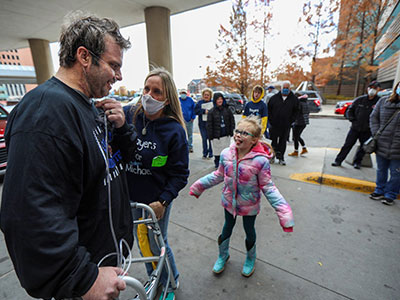 Seconds later, she ran — her arms spread wide open — into the embrace of her 41-year-old father as he was wheeled out of the DMC Rehabilitation Institute of Michigan in Detroit on Thursday.

Three months ago, Michael Rybski, who was unvaccinated and had reservations about the COVID-19 vaccine, became ill with the coronavirus and nearly died. He was on a ventilator and spent 41 days on an artificial heart-lung device, being one of about 40% of people placed on the device who survive, one of his DMC doctors said.

Rybski hugged his daughter tightly, his head on her tiny shoulder. His wife, Jeana, 40, joined the embrace.

"Thank you all," he said to the approximately dozen relatives from Carleton in Monroe County who cheered and held signs outside the institute, where Rybski spent more than a week undergoing occupational and physical therapy after leaving the intensive care unit at DMC Harper University Hospital.

To Mia, he simply said: "Sno-cones!" before getting into a vehicle — still needing oxygen — to go home in Taylor.

'I love you guys'

Unlike his wife, who was vaccinated in January, Rybski — a territory sales manager who sells aftermarket for Marketsource and owns Grip It & Rip It driving range in Flat Rock — wasn't inoculated against COVID-19 when the family became ill around Aug. 18. 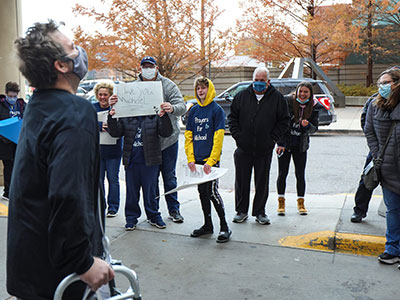 Jeana Rybski, a second-grade teacher in Lincoln Park, said she suffered bad chills one night; her daughter had a really high fever one night and a little bit of a cough. Her husband bore the brunt of the virus, which has racked up more that 1 million cases in Michigan and claimed the lives of 23,104 residents as of Wednesday.

He eventually was hospitalized at Henry Ford Wyandotte Hospital. About 3 a.m. Aug. 26, Jeana Rybski said she got a call from her husband, whom she married eight years ago.

"'They're putting me on the ventilator,'" she emotionally recalled him saying. "'I love you guys.'"

Jeana Rybski said the next day she was on the phone begging with the doctors to get him on the artificial heart-lung device called ECMO, or Extracorporeal Membrane Oxygenation. DMC Harper University Hospital in Detroit, which is one of the places in southeast Michigan that has the units, accepted him and put him on it Aug. 27, his doctor and wife said.

Jeana Rybski said she was told to be patient and that this was "pretty much the last-ditch effort in order to make him survive. It was his only chance." She said while on the device, he had tubes coming out of his neck and groin, his head was wrapped and he had lots of IVs, fought pneumonia and both lungs collapsed at different times.

"It was super scary just to see what COVID does to your body," she said. "It's just a miracle by God that he is still here. ... We almost lost him, and I just can't imagine raising my daughter without him. That was my biggest scare. My daughter might not know her daddy. I can't take that because she loves him so much."

Dr. Kenton Zehr, a cardiothoracic surgeon and executive director for the cardiovascular service line at DMC, said Rybski fit the criteria for candidates who could be placed on ECMO. Among the criteria: Rybski was under age 60, had a body mass index less than 40, his only organ system failure was his lungs and he had not been on a ventilator for too long. "It's a real saving therapy for patients like Michael," Zehr said. "He did not have any other options, and now he's gonna live longer and have his quality of life back."

Zehr said this year they will probably put about 40 patients on ECMO, most of them COVID-19 patients. He said he has not seen a vaccinated patient on ECMO.

"I think the real story here is that vaccination works. And even if you are a breakthrough case, you don't break through to the point where you're going to require these maximum therapies," Zehr said. "ECMO's a great therapy and it saves a few people from this pandemic and they're grateful for it. But the real message here is to avoid all this by joining the vaccinated people."

"Get vaccinated. You know, it's a real disease," he said. "I feel for the people that go through what I went through. It was very tough. I think if I was vaccinated, I wouldn't have been here."

Rybski said he has convinced about 30 to 40 people in his circle to get vaccinated. A few of them, he said, got the virus afterward and had mild symptoms.

"It was definitely a life-changer," he said of his ordeal. "It was tough. It was a long three months."

When Rybski arrived at the rehabilitation institute, he needed about 50% assistance to get out of bed, stand and perform self-care because he was so debilitated from the prolonged hospitalization, said Madison McNamara, a senior occupational therapist. 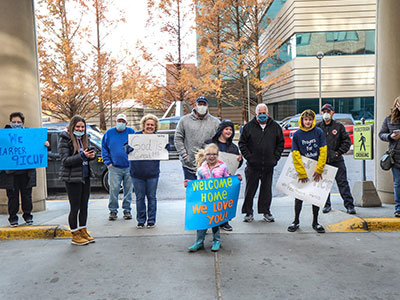 She said they anticipated keeping him for about three weeks, but he made such good progress he was able to go home early. He's now independent in all of his skills, such as getting up, getting to the sink and getting himself dressed, she said.

Rybski said "support, prayers and family" got him through the last three months. "Every day, I had somebody here. Phone calls once I was able to talk. Just, you know, God — reached out to him — and obviously the will to fight."

But his recovery is far from over.

McNamara said Rybski will receive occupational and physical therapy three days a week and remains on supplemental oxygen to maintain his oxygen levels. He will continue therapy for at least six months.

"He has a long road of recovery," she said. "COVID is very debilitating. He lost a lot of cardiovascular endurance, so that is something that only time can get back. So he's gonna continue on endurance training with outpatient therapy and just getting back more independence."

And there will be lots of doctor follow-ups; monitoring of medication to keep his heart rate down, and everyone in the family working to stay healthy and keep the flu and other illnesses away, Jeana Rybski said.

And, she said, he'll be getting his COVID-19 vaccine.