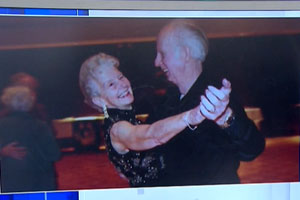 DETROIT – For Kathryn Gornick, dancing has been a love affair that has lasted a lifetime. At 85 years old, she has no plans of it ending anytime soon.

"My mother started me when I was seven. She taught me to waltz as meager as she could and I've loved it from that moment on and I've been dancing ever since," said Gornick.

For the past 30 years she has been teaching ballroom dancing. She also won seven gold medals at the Michigan Senior Olympics.

Then Gornick realized something wasn’t quite right with herself. She said she would climb the steps from her dance studio and become breathless. She would take two steps then have to stop and catch her breath.

Her cardiologist determined the heart valve she had had replaced 19 years earlier was leaking.

“It was raising the pressure in her heart and the pressure has to go somewhere so it was going to her lungs. She could hardly walk a few steps and get short of breath," said Dr. Chaman Sohal, an interventional cardiologist at Detroit Medical Center.

The heart team at Detroit Medical Center Heart Hospital met to discuss Gornick's case and determined instead of having her undergo another open heart surgery, she should receive a less invasive procedure called TAVR.

"I'm going to get better. I’m going to have this procedure, no matter what it is, because I can’t live this way," Gornick said.

Sohal inserted a thin flexible tube into one of Gornick's arteries and carefully guided the replacement valve up into her heart and expanded it into place.

Gornick said she went home the next morning with no pain.

Gornick's doctors are thrilled with her recovery.

"Katherine is a big dancer and a dance teacher and she is nothing but life I call her sometimes Vida because it means life," Sohal said.

They also encourage all patients to see what new options are out there when make their own treatment decisions.

“A lot of times, patients, family members, friends think it’s because of their age they are slowing down but it was because that we have a problem that needs to be corrected,” said Dr. Ali Omar, an interventional cardiologist at Detroit Medical Center.

“There are so many wonderful doctors that are out there that can help them, but they’re so attached to one doctor or one hospital or one whatever. Get out there and explore, read, start reading about what you think you have,” Gornick said.

"There's so much that can be done for health today."

When it was first developed, TAVR was only considered an option for the sickest patients, who would not be able to survive open heart surgery. In 2019, the FDA approved it for more healthy patients too.

As for Gornick, she said she hopes to be doing the polka on her 100th birthday and wants to teach Dr. Sohal how to dance too.

Read the full story and watch the video here.