Skip to main content and our Accessibility Statement may be found in the footer of our website.
Our Response to COVID-19 & Updated Visitor Restrictions
Back To Home

Choose your arrival time at a location near you and wait in the comfort of your own home.

The safety of our patients, visitors and staff is our top priority. To help create a safe environment for everyone, effective immediately, the DMC has put in place temporary visitor restrictions.

You can place your trust in the DMC for all of your health care needs.

Detroit Medical Center’s (DMC) record of service has provided medical excellence throughout the history of the Metropolitan Detroit area. From the founding of Children’s Hospital in 1886, to the creation of the first mechanical heart at Harper Hospital 50 years ago, to our compassion for the underserved, our legacy of caring is unmatched.

Learn what makes us a Community Built on Care

Gene Cabadas was dying, bleeding out from a tear in his aorta.

The clock was ticking on the South Lyon man's life with each heartbeat and minute that passed, as well as each hospital that passed on giving the 85-year-old Cabadas the surgery that could save him. 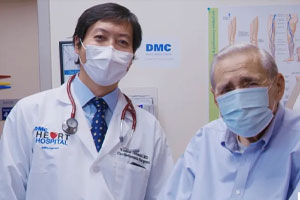 Dr. Yusuke Terasaki, DMC cardiothoraric surgeon, with Gene Cabadas of South Lyon. Cabadas had life-saving heart surgery at DMC in August 2020. In all, three hospitals declined to take him.

The fourth proved to be the charm when Dr. Yusuke Terasaki, a Detroit Medical Center cardiothoracic surgeon, answered the call with a yes. With no time to waste, Cabadas was put on a life flight to Harper University Hospital.

“His condo is across the street from the hospital, he could hear the helicopter coming in the dark,” Cabadas recalls. “I landed and was in an unfamiliar hospital with a doctor I’d never heard of before… I thought, ‘Who is this?’”

But the answer was simple and came to him immediately:

“Someone willing to help me when no one else would.”

Cabadas spoke by phone with his wife Ellen by his side to help recollect the terrifying events of Aug. 25.

It was about 1 a.m. that day when Cabadas was startled from sleep by excruciating pain in his lower jaw. He stumbled to the bathroom, where he dampened a washcloth to put to his face before making it back to his bedroom, where his left arm went numb.

“The next thing I know, I’m laying on the bedroom floor and I heard Ellen talking to EMS and then I don’t remember anything,” Cabadas said. 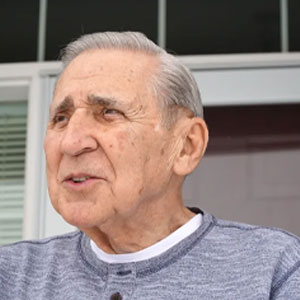 Ellen Cabadas, Gene’s wife of 65 years, picks up the thread.

Gene Cabadas had a tear in his aorta, the main artery that carries blood from the heart to the rest of the body. He needed a surgery to repair a Type A aortic dissection, which is not performed at the emergency room to which he was taken.

But as the ER physician called hospitals with the capabilities of performing the surgery, each declined to accept Cabadas as a patient. Until the call to DMC Heart Hospital, where Terasaki and the team of heart doctors perform between 20-30 aortic dissection surgeries per year.

“Mr. Cabadas was rejected by the hospitals mostly because of his age. He’s 85 years old,” Terasaki said on why he thinks the other hospitals declined the surgery.

While Terasaki notes that age is indeed a risk factor, he doesn’t believe it should disqualify a patient from a surgery that without it the patient will almost certainly die within 48 hours.

He said he and the DMC team like to see and assess patients on an individual basis. He told the hospital’s transfer center to bring Cabadas over and what he saw upon his patient’s arrival was that Cabadas is an 85-year-old who had remarkably good baseline health — without kidney or lung disease, not obese, good blood pressure.

“An 80-plus-year-old who still mows the lawn and snow blows is different from one that is bed-ridden,” he said. “It’s important for us to differentiate. I have to lay eyes on the patient and assess him myself, I have to give the benefit of the doubt, and I think we did better than facilities that rejected him based on age.”

It was late that night when Terasaki set to work on Cabadas, and it gave time to Gene and Ellen’s five children to arrive, three from out of state, to show their support even though COVID-19 restrictions were in place.

Because of the pandemic, Terasaki said the hospital has performed fewer aortic dissection surgeries this year, attributable to some patients’ reluctance to go to the hospital for any emergency until it is too late and other potential patients dying from the virus itself.

The aortic dissection surgery is the most intense operation the DMC heart team does, Terasaki said. Cabadas spent about 9 hours total in the operating room, where he was put on a heart and lung machine. The majority of the time in surgery is for cooling the body to 18 degrees Celsius to stop blood flow and then rewarming it again. The surgery itself, in which the torn portion of the aorta is replaced with a synthetic graft, must be completed within 50 minutes or the risk of stroke increases. 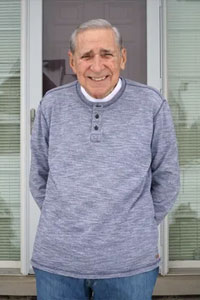 “We are fighting time,” Terasaki said. “It’s the most intense type of operation we do. Unfortunately, the mortality rate after or during surgery is 20 percent, really high. One in five patients don’t make it.”

Terasaki took the risk with Cabadas and it paid off with the priceless gift of life.

“I’m always happy to see patients who do so well after the surgery, after you have done something with your hands and fixed it,” he said. “We really enjoy doing what we do and are happy to see that positive end result…He was such a pleasure to take care of and has a wonderful, supportive family to care for him after. It is pure happiness to see that kind of patient and an honor to take care of him and I hope he has many more years to live.”

Cabadas plans to enjoy many more years with Ellen, whose cooking he attributes to his good health, as well as with their entire family, which besides their five kids includes 12 grandchildren and three great-grandchildren.

“I was able to enjoy my 85th Christmas with my family because of what they did for me,” said Cabadas, who also benefited from the DMC Rehabilitation Institute. “Hopefully, I have a lot more Christmases with my family. They returned me the gift of life. They saved me, no matter how old I was, they gave me a chance. I’ve got a lot of living left to do.”