Skip to main content and our Accessibility Statement may be found in the footer of our website.
Back To Our Stories
{{CTAButtonText}}

Jennifer was 48 years-old, but felt like she was living in a 90 years-old body. Her hip pain was constant from the time she woke to when she fell asleep at night. She needed help just doing simple daily activities. Life was passing her by, so she decided to see an orthopedic surgeon at DMC Huron Valley-Sinai Hospital, who recommended a total hip replacement. Jennifer is thrilled with her results, and says sometimes she even forgets she had a total hip replacement. She is doing things now she has not been able to do in years. Her only regret is not having the surgery sooner.

Imagining life without joint pain may be easier than you think. The Detroit Medical Center’s orthopedic team specializes in surgical and non-surgical treatments for hip pain. This includes minimally invasive hip replacement surgery, designed to help you recover quicker and with less pain when compared to traditional joint replacement surgery. To see a DMC orthopedic specialist about your options, call (313) 494-9440 or click here to learn more about hip pain treatments. “I was very healthy my whole life,” says Zaneta Moser. “I had never had a surgery or gotten the flu.”

That all changed in 2011, when Moser had a mammogram that came back with an abnormal lump. Her next step was needle testing and the lump came back as fatty tissue. At the recommendation of her gynecologist, Danny Benjamin, M.D., OB/GYN at DMC Huron Valley-Sinai Hospital, she went for additional testing at the Sinai Center for Women at DMC Huron Valley-Sinai Hospital.

On December 2, 2011 she was diagnosed with breast cancer. “The news was very shocking,” she says. “It turned out to be a low grade cancer because they caught it early.”

Moser had lumpectomy surgery and lymph nodes under her arms removed. After her surgery, she started radiation treatments with Kimberly Hart, M.D., radiation oncologist at DMC Huron Valley-Sinai Hospital. “Dr. Hart and team were very good at explaining the process to me,” she says. “They always made me comfortable.”

During her treatment, she continued to work full-time. “I wasn’t able to walk away from my job when I was diagnosed,” says Moser. “My company was very supportive of me and gave me the extra time I needed for my treatments. Dr. Hart and the radiology team helped the process by always being on time.”

She also recently tested positive for the abnormal BRCA2 gene, which means her risk of developing breast cancer in her lifetime is between about 40% and 85% and her lifetime risk of ovarian cancer is significantly elevated as well. “My sister died from ovarian cancer so when I tested positive for the BRCA2 gene, I went ahead and had my ovaries and tubes removed by Dr. Benjamin,” she says. “I feel lucky for the advances in medicine because this test didn’t exist when my sister was diagnosed with cancer.”

Moser is an advocate for mammograms because they can lead to earlier diagnosis, resulting in a significant decrease in breast cancer deaths. “You have to be proactive with your health,” she says. “Detection is the key. Early detection is what helped me identify this before it got much worse.”

“I did have my days where it was overwhelming but all of my physicians, nurses and the medical staff were so supportive, compassionate and concerned for me,” she says. “They walked me through a negative experience that became a positive thing.” 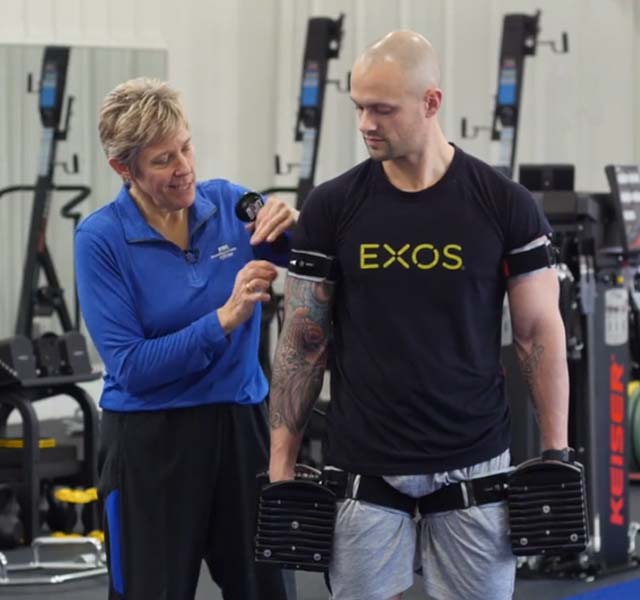