In the race to save lives seconds count. 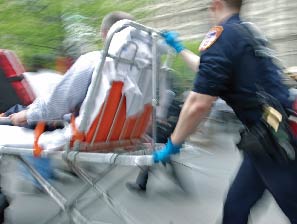 Standing ready in the heart of Detroit, DMC Detroit Receiving Hospital’s Level-1 Trauma Center is first in mind when a health emergency arises. From area residents to out of town visitors, athletes, entertainers, national and international leaders, Detroit Receiving is acclaimed for its emergency care. DRH also provides emergency teams for the Free Press/Talmer Bank Marathon and the Detroit Grand Prix, and that’s where the story of Australian super truck driver Matt Mingay begins. Mingay was roaring around the track in the 2016 Detroit Grand Prix when his truck turned on its side and hit a concrete wall, ripping open its roof. In the mayhem, Mingay’s jaw was torn off, and he suffered 40 broken bones. On site as the part of the Grand Prix medical team, DMC emergency physicians Dr. Jenny Atas and Dr. Trifun Dimitrijevski rushed to his side, keeping their critically injured patient alive for transport to Detroit Receiving, where the new race to save his life began. The Level 1 trauma team performed a series of emergency surgeries, and when Mingay was stabilized, the Oral and Maxillofacial team reattached his jaw and chin, a complex procedure under any circumstances. Today, Matt has recovered beautifully and during various media appearances has shared the story of the excellent care he received at Detroit Receiving Hospital. His life and career are back on track.

A Community Built on Care